Gramercy Park Studios have once again teamed up with WCRS to produce ‘This Is Play 2’, the latest integrated campaign from Betfair. Following up to last year’s highly successful 'This is Play’ campaign, which centered upon a table-tennis playing octopus, this campaign features a high-octane horse race – with a twist.

Shot over a 10 day period in various parts of Poland, Gramercy Park Studios contributed a full range of a post-production services to the project, including; Audio Production, Sound Engineering, Editing, Grading, 2D, 3D and Motion Graphics.

Directed by Papaya Films’ Brent Boncorso, the 30-second TVC – ‘Horse Racing’ – focuses on the ease of betting on horse-racing with Betfair; simply pick a race, pick a horse and place your bet. With the bets firmly placed, the punters watch on as a trio of rally-car-driving horses zoom over the horizon, hurtling along a muddy track alongside their co-riding, jockey passengers.

Betfair
Add to playlistRemove from playlist

3D Lead, Nuno Pereira comments: “At GPS we’re always trying to improve ourselves and we see each project with a new light, a way to aim higher and move forward. What we have successfully accomplished in the past, such as the success of the Octopus commercial, has not been determinant in how we feel about facing new challenges.

“Throughout the years in commercials we've done some strange things but horses driving rally cars was definitely out there... but then came all the excitement of all the challenges that creating something like that would pose.”

It was a full-service project for the Soho-situated post-production facility and Nuno adds: “It was quite fun doing it all under one roof. It was impressive to see how the commercial was evolving internally. We had it being edited in one suite while grading was happening in another and all the VFX and CG was happening at the same time at the end of the corridor. This enabled us to address client changes in a matter of hours to sound, grade or the edit, that had they been done at a different facility would have taken days or weeks to turn around.” 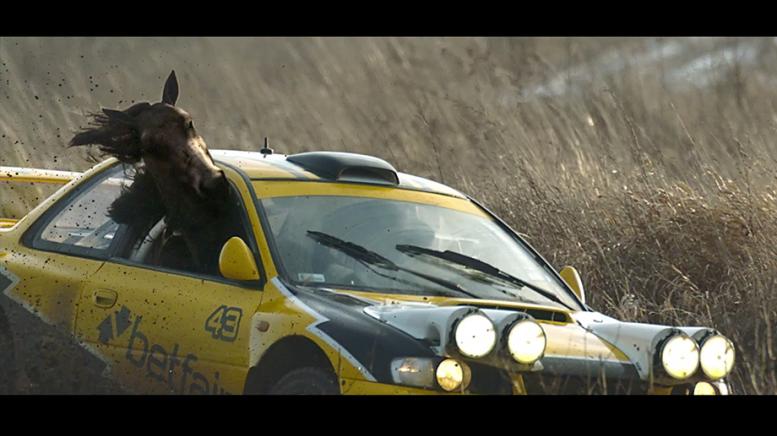 The extensive CG project was shot on both Alexa and Phantom and at various frame rates, allowing Editor Vee Pinot – who was editing on set whenever possible – to experiment with the speed ramping.

A fast turn-around and tight deadline resulted in long days of editing for Vee, who comments: “Editing onset can be challenging. The Horse Racing spot was shot in Northern Poland in the middle of a muddy field with subzero temperatures, far from the cosy editing room I’m usually in! Editing onset meant that we could have a rough assembly by the end of each shoot day, so there was the possibility to spot problems in advance.

“It’s always a pleasure working with Brent. His vision and Magdalena Gorka’s cinematography make the editing process a dream experience, with stunning shots and a lot of options to choose from – a perfect scenario for any editor!”

Sound Engineer, Zak Kurtha comments: “The film is composed of two very distinct sections. Considering how much high-energy footage there is in the commercial, to devote so much time to the moments before the octane fuelled payoff presented some really interesting opportunities from a sound perspective. The first section had to convey a sense of isolation and distance but also remain engaging and build anticipation for the excitement that is round the corner.

"The feel of the engines is an important element of the commercial so matching the energy of the visuals in the second section and getting the visceral energy of the rally engines to cut through without overpowering the mix was a challenge. A lot of the layers for the atmospheres were created specifically to make them as unfamiliar as possible. The slow mo sections also had to be constructed with some consideration so that they accurately followed the action but didn't lose any of their intensity."