Gramercy Park Pulls Off Some Festive Transformations for Homebase

Gramercy Park Pulls Off Some Festive Transformations for Homebase
Components

Leo Burnett and Hogarth Worldwide have unveiled the Christmas 2014 campaign for Homebase. The campaign, which was a true Gramercy Park Studios company-wide post-production effort, aired on 19th November.

Launched as a 30 second TVC, the film is a continuation of the ‘Make Your House Your Home’ campaign which shows a couple – and their dog – prepare their home for Christmas. In an attempt to host the perfect Christmas, the couple transform their home with the assistance of the Gramercy Park team. The pair improve their uninspiring home – to the approval of the couple’s dog – by enhancing the Christmas tree, dining table and bedroom, injecting a personal touch into their festive décor.

Gramercy Park’s Francisco Lima, Technical VFX Supervisor, comments “The shoot was challenging given the amount of shots that had to be acquired in the two day shoot, coupled with the complexity of the physical elements that needed to be built, setup and shot - such as the rotating, decorated table-top and the bed that had to open and close.” 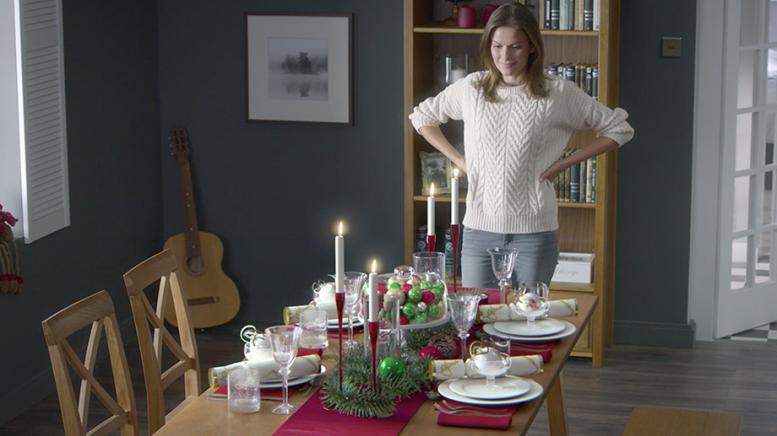 He adds “The Director, DP and Crew were extremely collaborative and supported us on making sure we got every plate, every reference and all on set data required so that everything went smooth in Post.”

Senior Editor Vee Pinot was on set, where she was able to cut the film as it was captured as the editing system was directly connected to the playback system. Vee comments “It was a privilege to meet and work with Brent Bonacorso who is known for stunning visuals and clever post technique. Editing on set meant that we could test his ideas straight away. The editing process was a collaborative and fun experience, resulting in a very whimsical outlook.”

Commenting upon the extensive CG work that Gramercy Park provided, CG Lead Nuno Pereira says “While on set we were capturing as much information and data as we could, thinking mainly on the bed transformation and the table cloth centre piece we knew we had to do at the time. We filmed examples of how all the different cloths and pillows would react under different conditions so we could base our simulations on that.”

He adds “In the end, not only did we build the bed and the table cloth centre piece with all the cloth simulations, but the entire Christmas table in CG. This allowed the Flame team to dedicate their time to improving the shots rather than painting out the table practical rig and all the Christmas contents on it.”

Andrew Curtis, Gramercy Park’s Flame Lead, says “When it came to the CGI elements of the commercial, we worked closely with the CG team. This allowed us to integrate the CG elements perfectly and indeed create the perfect work flow between departments allowing quick updates of revised renders, resulting in extremely fast turn arounds of edits and indeed this very realistic finish. It was a great collaborative job to work on.”

It was a full post-production package for Gramercy Park Studios who also provided the sound design. Discussing the sounds of the spinning tree, Sound Design Toby Griffin says “We sourced a Christmas tree, set it up on a VO booth and decorated it – just so that we could capture the clinking of baubles!”

‘Harriet the dog’ will feature in a viral, spin-off ad which has been created exclusively for social media. Gramercy Park’s Josh King comments “Of course, as its Christmas there’s a cute animal – this time it’s Harriet. Penguins are so over.” Follow Harriet’s adventures @Harrietwoofs.